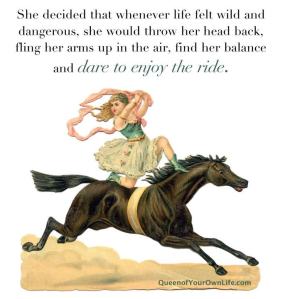 Sounds fun, right? Just go with it? Run in the direction of the thrill and the passion. Chances are we have all made that choice before. If you are bipolar, the chances are slim to none you haven’t. Unfortunately, those of us that struggle with the disease tend to get burned when we make decisions like that.

Mania, and hypomania can lead to some extreme decision-making. I have been there and know that the manic brain doesn’t work like our logical self. The flights of fancy, and racing thoughts can lead to some interesting places. Some wonderful, some scary, some downright awful. But it is the ride, the thrill of it all while it happens that can be awesome. Like the woman in the picture above. Precariously balanced on that racing steed, into the great white expanse of impulsiveness. That is where hypomania and mania suck you in. Longing for that off to the races with no end in sight kind of feeling. I miss that. I miss having the energy and drive to do anything. The ability to set sail.

For me those types of episodes are few and far between. My normal would be maybe a week or two, in the course of every year. Usually in the Spring/ Summer, as everything blooms and the world holds such promise. Everything is alive and thriving, why not me? Aside from that occasional week, the only times I really had an issue was with a medication reaction. Once to Abilify when it was used to try to improve my mood, and once to an injection of steroids. I find it pretty humorous that every time I see that damn Abilify ad on TV I actually wish I could go back on that ride again. Yep, head thrown back to the wind charging along blindly. What I fail to remember, in those moments, is how it hospitalized me, and almost cost me my relationship. Would I throw it all away, just for the ride? Part of me says yes. Part of me so deeply wants to be moved in such a life altering way. To feel immense in power and promise. To soar above all that is troubling and awful. To finally kick free of a depression that clings to me like static. I want a life without that nagging, never-ending worry and doubt. Leave the anxiety and apathy behind. To run free in my mind and body.

The thing about hypomania/mania, is it isn’t just in your head. It becomes all about the experience. The ride. Whether it be sexual desires that are explored, or following your senses in the exploration of sights, tastes and sounds. It is about the awe of the world we live in. About the promise in the future, by living with tactile purpose. Until you have been on this course it is hard to explain and even harder to justify longing for it. In its very initial stages, it is wonderful. There isn’t a drug in the world that can mimic that high. Unfortunately, it doesn’t stay that way. It becomes an irritable, edgy, uncomfortable place quite quickly. But you still remember the initial high, and like all addicts, it is hard not to chase that high. When I close my eyes at night I long to open them and feel that drastic shift. It takes but an instant to recognize. In that first moment, when my heart skips a beat, and my mind floats. In that moment when the weight of depression finally lifts entirely. Oh, but I long for that, with every fiber of my being. I want to be free of this terrible burden. I want to be without pain, suffering, apathy and anxiety. I want to again be filled to the brim with possibility and promise. To feel it fill my very soul with hope and longing. I want my cup to once again run over with its warmth and radiance.

When looking at it from the outside, you see a person on the edge, or past the edge of control. The decisions they are making are destructive and dangerous, just as dangerous as the lady balanced on the horse in the picture.  I know that, intellectually I understand it. I KNOW. So, why then do I long for it? Why does it feel so much like an elixir for my desperate soul?