As is often the case we come to a crossroads with our charges. We hold their lives in our hands and ultimately make the decision to let them go. Today we said goodbye to Blake. He was one of the original rescues that started this place. I knew when he didn’t make it over to his bucket late last night at night check. Horses are creatures of habit, even more so than use humans. They have the most accurate clock in their heads. I know what time it is just by looking at who is standing where in their fields. Towards feed time they make their way to each spot where they receive their meals. So in the dark under the waning moon, I knew he wasn’t where he was supposed to be. I get this sinking feeling in my chest. That deep connection to these creatures, and all the years I have spent with them has given me a bit of a sixth sense. I know when it isn’t going to end well. I just know. So I set off in the dark to find him. He wasn’t far. He was trying to get to us. I stood there resting my head in his. Just taking in the information he was presenting to me. I made the decision to medicate him and give him till morning. I could have called the vet. I could have ended his life there under that moon. I didn’t. I made sure he wouldn’t suffer and I walked away. I knew in my heart that night would be his last. I drifted off into a troubled sleep early the next morning. My heart was heavy this morning when I looked out the window and saw much the same posture and difficulties as I had seen in the dark.
I knew we would say goodbye, and that we had reached the end of the road. I brushed him off, and let him wander the lawn eating the lush new grass. He managed in his uncoordinated ataxic gait to eat happily. The time ticked by fast and the all too familiar sound of the vet truck pulling up to the barn came way too soon. I stood, as I have countless times before holding the massive head of a horse, looked them in the eye, as the needle slid into their jugular. It never changes. They drop to the ground, and I mean drop. There they lay, my hands on their head. The heart slowly ceases to beat, their breathing stops and they leave this earth and our care. I went about my job, just as I do each time. I hold the horse. I make sure they remain still as large quantities of barbiturates are delivered into their vein. I keep the vet safe. I keep myself safe. I say goodbye. I feel like I have done this too often. Far too often. The job does not end there. A horse is about 1200lbs on average. Blake was well over 2200lbs. They need to be disposed of. We usually have them buried. Thankfully we have a kind fella that does all the excavation. He knows us, and has buried so many of them. I differ much from my partner, in that I feel they are gone. It is just a part of the wrap up to bury the carcass. To my partner it is very important. How they are put into the hole in the ground. The way they are arranged, and how they are facing. Always toward home. So the process starts to figuring out the actually nuts and bolts of getting this done. It isn’t pretty. It involves heavy machinery and chains. 2200 lbs of dead weight complete with lolling head and blue tongue. Today the hole was in an area that was all bank run gravel and sand. Very very dangerous, and easy to collapse fast. There was no option of arranging him, or even having anyone climb down via backhoe down the 20 feet into the hole to unchain his legs. We had no option. He had to be slowly pushed over the edge and left to free fall till he hit the dirt at the bottom. I guess I should have known to look away. I always cover my ears, since the sounds of snapping bone are too hard to shake off. So I am left with the visual of this massive animal falling to the dark earth, his head and neck snapping so violently I still can’t unsee it. He came to rest looking quite peaceful, and my partner was happy. We watched and stood witness as the earth claimed this huge animal we knew and loved. Just like that it was done. I walked away. I felt nothing but a chill from the damp cold rain that was falling steadily. A few hours later I stood in the kitchen making a salad when the most searing image flew hard and fast into my head. I saw him fall, and watched his neck and head snap back. It was violent, it was gripping. I shook it off. I walked away. But I realized in that moment how much this process takes out of us and how much it leaves in its wake. It took a very violent image, a flash back per se, to make me understand just how awful it is. Sad it took that to point it out.
There is nothing easy about saying goodbye. It is all the more awful when you are left to sort out the pieces that are left in your head and heart from such an terrible process. 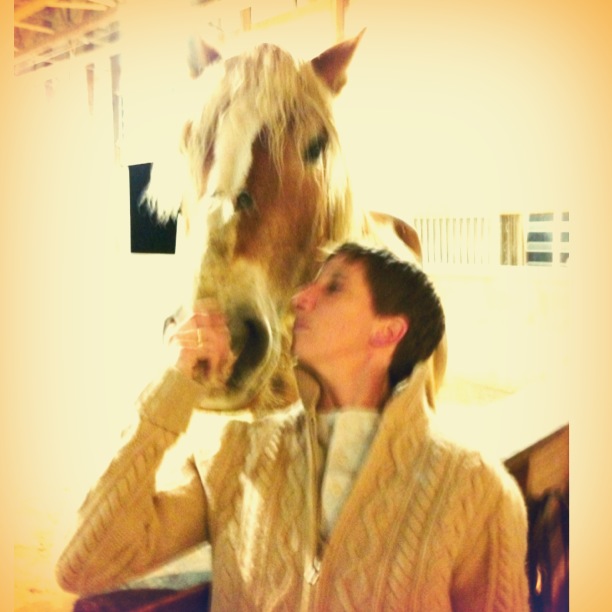