I finally sat down to watch Blackfish, the much acclaimed film about captive Orcas and SeaWorld. It was sobering and moving. Back in the 70’s my father was called north to British Columbia to treat a juvenile Orca that was found riddled with bullet holes and dying alone in Mences Bay. It took many months but Miracle, as she was to be named, came around. She survived and was flown to SeaLand, in Victoria. She would become one of these performing animals that put on a show for tourists. But all was not well with the now young adult whale. The behaviorist noted that she would repeatedly strike her head against the dock. It would go on for hours. Miracle had no family, no comfort. She was miserable. She didn’t last two years before she drowned in the nets that contained her. Sealand argued that activists had cut a hole in the net, others said the nets were a death trap and that the slack during low tide is what tangled the whale. Regardless, she died. Sealand tried to regroup, as shown in Blackfish they started “protecting” their orcas by keeping them in steel shipping containers overnight rather than risk them getting tangled in the nets. Tillikum (the orca the documentary was about) spent his early life like that. It was, as some think, what formed the behavior issues that later claimed the lives of so many different people. It was a chain of events set in motion by the saving of Miracle. Her time and subsequent death at Sealand all started a terrible ball rolling. I had no idea I would come face to face with that reality. It left me adrift and sad. Not because of the orcas, and all the trainers dying. It isn’t about whales. It is about losing my dad. It is about not having much if any communication with him anymore. 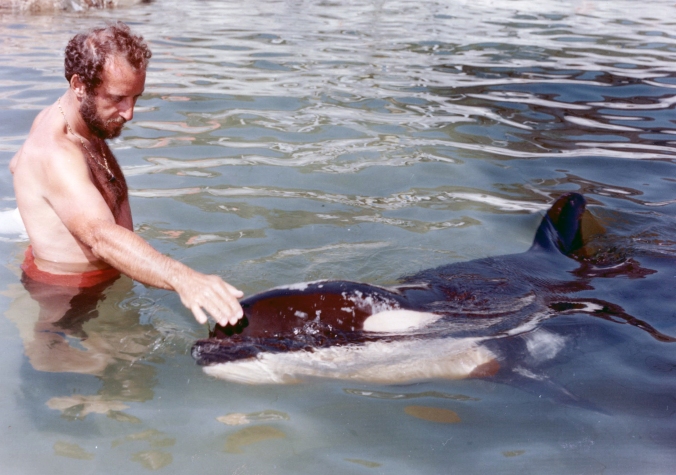 It comes down to losing touch and figuring out a way onward without this larger than life man and all the incredible things he did. He taught me to love and respect animals and my life today would not remotely resemble what it is without that influence. I wonder what he thought of this movie, if only I could just pick up the phone and ask him. if only.